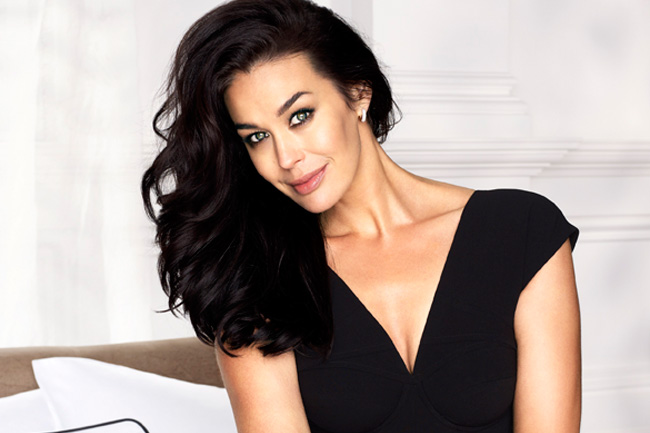 Megan Gale is an Australian supermodel and actress who has achieved considerable fame, first in Italy but now equally so in her native Australia. Born in Perth, Western Australia, in 1975 Gale is of half-British, half-Polynesian heritage and is the youngest of three children. Gale achieved her great fame and success rather late for a model. Megan has been described in an article as “Italy’s hottest star since Sophia Loren” and one of her hobbies is playing the Aboriginal instrument, the didgeridoo.

At twenty-four, while studying at university, she won a modeling competition and appeared in a series of advertisements for the Italian telecommunications commercials, Omnitel (now Vodafone Italy); she appeared in the company’s advertising from 1999 until nowadays. She was also retained by the Australian Tourist Commission in 2003 as ‘their face of Australia in Italy’.

Megan has modeled for Italian fashion houses such as Genny and favors many Australian designers, such as Akira Isogawa, Sass & Bide, and Alex Perry. Recently she was the fashion commentator for the Australian television awards, the Logies. Currently she is the face of the upmarket Australian department store David Jones. Megan’s appearances on the catwalk in the famous annual fashion parades are extremely popular and she has helped to raise David Jones’s profile to the younger market and trendy fashion designers.

She has also tried her hand at acting. She played herself in the movie, Vacanze di Natale and received top billing. She was Viviana in Stregata Dalla Luna and spoke entirely in Italian. She also won a part in the science-fiction movie Stealth which was shot in Sydney and was released in theatres in 2005. On November 30th, 2007, AICN reported that she had gotten the part of Wonder Woman in the upcoming George Miller movie version of Justice League.

She also worked with Mike Munro as co-host of the Australian documentary TV show What a Year, which first aired on the Nine Network on October 2, 2006, and was made up of nine episodes. In 2007 they were replaced by Bert Newton and Julia Zemiro and the show has since been axed.